Sometimes simple really is the best.

Don’t get my wrong, I love making trashy and over the top desserts with layers of chocolate and caramel and peanut butter, rich and decadent and delicious – but there will always be a place in my heart for a simple, classic sponge cake.

Inspired by a punnet of strawberries sat in my fridge, I decided to go back to basics with a Victoria sandwich, filled with jam, buttercream and fresh strawberries.

Although I did get one comment of ‘what made you decide to make just a sponge cake’, most people loved it, me included.

Simple, to the point, fresh and tasty – perfect for elevenses, afternoon tea, or just because!

Beat the butter and sugar together for about 5 minutes, or until really light and fluffy. Add the eggs one at a time, followed by the vanilla – add a spoonful of the flour if it’s starting to curdle. Sift together the flour and baking powder then fold into the cake batter. Divide between two greased and lined 6″ tins, then bake at 170 degrees for 20-25 minutes, until risen, golden and a skewer comes out clean.

For the filling, beat the butter and icing sugar together until well combined, then add the milk and continue to beat until light and airy. Spread a layer of jam on top of one of the sponges, then scatter the diced strawberries on top. Spread the buttercream onto the underneath of the other cake layer, then place this on top. Finish with a dusting of icing sugar and serve with a cup of tea!

If there’s one fruit I’ve really gone crazy for this year, it’s cherries.

They’ve never really been my favourite, and I one point I wouldn’t touch them, but this year I just can’t get enough. It may well have something to do with the fact that when I was in Romania cherry trees were in abundance, and the fruits they produced were the sweetest, juiciest cherries I have ever tasted.

My host in my first week in Romania, Christina, gave me a jar of her homemade cherry jam to bring home with me. I somehow managed to look after it for 3 more weeks of travelling around, and decided that I would save it for something special – and really, what could be more special than cheesecake?

Cheesecake is one of my favourite desserts, both to bake and to eat, and cherry cheesecake is a classic flavour combination.

I based my cheesecake on this recipe from BBC Good Food, but rather than making a cherry puree I used my fab cherry jam. It’s nothing like a ‘jam’ you would buy here, it’s more like whole cherries in a thick sort of syrup, and it’s not as sweet as a jam either – the downside of this is you can, and I do, eat it by the spoonful…

Instead of a creme fraiche topping I used more cream cheese, beaten with a little sugar, and used fresh cherries to decorate. The jam swirled into the cheesecake mixture created wonderful little fruity bursts in each bite, and the texture was, for me, spot on.

If you want to make this, I would recommend either buying the absolute best jam you can find, or making your own, otherwise I think it would end up being too sweet. I hope that doesn’t put you off though, because it really was delicious!

To make the base, blitz the biscuits in a food processor to form fine crumbs, then with the mixer running pour in the melted butter. Press the biscuit crumbs down into the base of an 8″ springform tin, and bake for about 10 minutes at 170 degrees, until just starting to crisp.

While the base is cooling, make the cheesecake filling. Beat the cream cheese and caster sugar together until smooth, then add the eggs, vanilla, cornflour, lemon zest and juice and beat again. Finally, add the creme fraiche, beat and pour over the cooled base.

Bake the cheesecake with a tray of hot water on the shelf below, for 10 minutes at 170 degrees, then reduce the heat to 110 degrees and bake for a further hour – the cheesecake should be set but still wobble. Turn off the oven but leave the cheesecake inside to cool to room temperature, then chill in the fridge overnight.

For the topping, beat the icing sugar into the cream cheese and spread over the cheesecake. Arrange the halved cherries around the edge to decorate.

When scones were chosen as the theme of this month’s Tea Time Treats challenge, I was pretty happy as they’ve been on my to-bake list for a while, and as far as I’m concerned there’s no better way of saying goodbye to winter than with a proper Cornish cream tea.

It wasn’t until I started to look for a recipe that I realised there were so many different versions of the humble scone, and so many things to consider.

Firstly, the flour. Self raising flour? Plain flour and baking powder? Plain flour and bicarbonate of soda? Then there’s the dairy – do you go for milk, buttermilk, cream, yoghurt, butter, no butter… And should they be sweet or savoury? Is adding spices or dried fruit sacrilege? 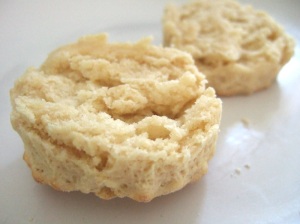 Faced with so many dilemmas, I eventually settled on this recipe from Jane Hornby, which sounded about right – self raising flour and baking powder, milk soured with lemon and butter. The only change I made was to reduce the sugar and omit the vanilla, as I don’t think scones should really be sweet – that’s what the jam’s for.

As far as I’m concerned, the only way to eat scones is with jam followed by clotted cream – not the other way round, and definitely not with jam and butter!

I did experiment a little, adding a handful of blueberries into my second batch, and eating them with lemon curd instead of jam… 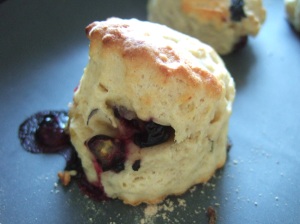 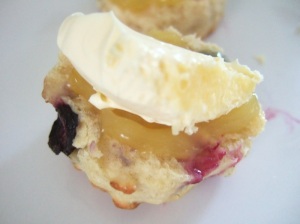 Delicious, but I still think when it comes to scones, the original is always the best!

Stir the lemon juice into the milk and heat for 20 seconds in the microwave. Sift the dry ingredients together into a large mixing bowl and rub in the butter until the mixture resembles breadcrumbs. Slowly add in the milk and cut through the dough with a butter knife, until it’s just starting to come together. If you want to include the blueberries, add them now.

Knead once or twice to bring the dough into a ball, then flatten out with your hands to about 1″ thick. Use a 5cm round cutter to cut out your scones, pressing straight down and not twisting. Place onto a baking sheet, and brush the tops with milk. Bake at 220 degrees on a high self for 9-10 minutes, or until risen and golden brown.

Leave to cool for 10 minutes, then slice in half and serve with jam and clotted cream.

This is my entry for March’s Tea Time Treats challenge, hosted by Karen of Lavender and Lovage. 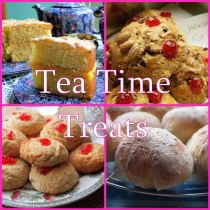 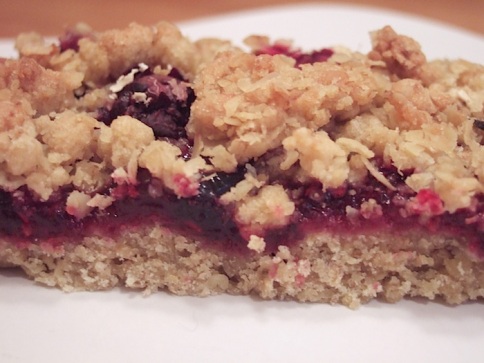 I’m always on the lookout for things that are quick, cheap and keep and transport well for the friendly pony to take to work, and as soon as I saw these bars on 17 and Baking I knew they would be perfect.

The same mixture makes the base and the topping so they’re super quick to whip up, and all the ingredients are things I usually have on hand, plus the flavour can be adapted to whatever jam or fruit you need to use up.

I used a mix of blackcurrant and the last of my homemade raspberry rose jam, with a handful of frozen berries thrown on top which turned out great, and was a nice change from all the chocolate baking I’ve been doing lately!

Mix the flour and sugar in a food processor, then add in the butter and mix until it forms bread crumbs. Transfer into a bowl and stir in the oats, then add the milk and bring together with your hands into a dough. Press about 3/4 of the mix into an 8×8 square tin, lined with foil.

Spread the jam on top of the base, heating a little in the microwave if it’s too thick to spread easily. Add the berries on top if using. Sprinkle the rest of the oat mixture on top, then bake at 190 degrees for about 25 minutes, or until golden. Leave to cool before slicing into bars.

Before cupcakes became so popular, it was all about fairy cakes – and I think butterfly cakes are the ultimate version of the fairy cake.

Light sponge, just a little buttercream, and ‘wings’ proudly poking out the top, I think I’d take one of these bitesize treats over a sugar overloaded cupcake any day.

Butterfly cakes (sponge recipe from The Great British Bake Off book, icing my own)

Cream the butter and sugar together until light and fluffy, then beat in the eggs and vanilla. Fold in 1/3 flour, then half the milk and repeat, finishing with flour. Divide between 12 cupcake cases and bake at 180 degrees for approximately 20 minutes, or until risen and golden. 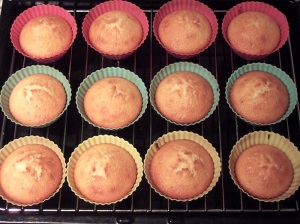 For icing and filling:

Beat the butter and half the icing sugar until well combined, then add in the milk, vanilla and lemon. Beat again, then add the remaining icing sugar and keep beating for 3-5 minutes until really light and fluffy.

To assemble the butterfly cakes, first cut the tops off of each cake with a knife. Don’t throw the tops away, as they will make the wings.

Spoon a small amount of jam or curd on top of each cake (I used blackcurrant jam, raspberry rose jam and orange curd).

Pipe a swirl of icing on top to cover the jam, starting from the outside and working inwards so the jam doesn’t ooze out of the sides. 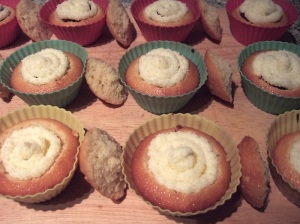 Cut the cake tops in half, and the place back on top to resemble the butterfly’s wings.

Super cute! Enjoy as an afternoon treat with a cup of tea or coffee.

I’ve wanted to make my own jam for a while, but have always been a bit put off by the fact it’s WAY cheaper to buy.

I finally decided it to do it this week, in preparation for my entry to the August We Should Cocoa challenge, the theme of which is rose.

I found this recipe for raspberry and rose water jam, which appealed because it didn’t require any specialist equipment or my own body weight in fruit and sugar.

The recipe is really simple, but calls for heating the sugar in the oven before using. I was a bit doubtful about this, and was proved right as the sugar started to caramelise and was unusable. As I’d already started boiling the raspberries I just threw in some more sugar straight from the packet, and to be honest I can’t really see any negative effect this has had.

This jam has so far been used on scones and as the filling for a very special victoria sponge, which will be blogged about soon. It will also be used in my We Should Cocoa entry which I’ll be baking later this week! 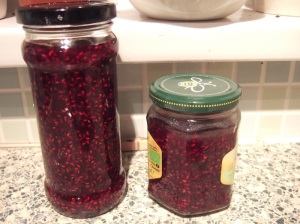 Place the clean jars you are going to use in the oven on a low temperature (I filled one large and one small jar). Gently heat the raspberries in a large saucepan and slowly bring to the boil. Boil for 5 minutes, then remove from the heat and add in the sugar and rose essence. Stir until the sugar has dissolved, then bring back to the boil for another 10 minutes. Test if the jam is ready by pouring a little on to a cold plate, leave it a couple of second then tip the plate. If the jam doesn’t run then it’s ready! Pout into the pre-heated jars and leave to cool.